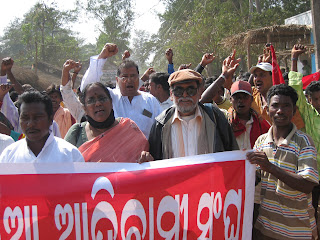 The news of martyrdom of Comrade Gananaath Pathro on 6th June 2020 reached me a little late. I am disturbed very much by the death of that comrade. I am extending my revolutionary tributes to him. I express heartfelt sympathy towards the life partner of Comrade GP Ms.Safaali and his family members. As there is lack of transport facility due to corona I failed to meet his bereaved family members. Comrade GP and I worked in different committees for 40 years. When he was the Orissa state committee secretary I worked along with him in Malkangiri and Koraput areas. In the revolutionary movement my affinity with him was great.

Comrade GP belongs to Baleswar district in Orissa. Though born in a very poor family he  completed his M.Sc in Chemistry. As an employee he came from one corner of the state to another corner and joined as a lecturer in Parlakamidi college. As he had the influence of communist politics right from his student days, he was very much influenced by the girijan peasant movement in Srikakulam area. So he resigned to his job and participated in the struggles at Uddanam area. For some time he worked as a squad member also. In this process he assessed the different streams of revolutionary politics and in 1973 he joined in the organization led by Comrade TN. He became a member of AOBRC and Comrade Viswam was then its secretary .  Then onwards he worked under the state committee.

We used to have organizational and agitational connections with the state committee members of Orissa viz Comrades Vijay Upadhyay, Susheel Roy and GP. Malkangiri area  committee which is under AOBRC used to take help and cooperation of Com. GP for the forming of mass organizations.

Comrade GP was arrested in 1985 in Rourkela.  Soon after his release from the jail, Com. GP under the direction of the central committee actively participated in the movement against the launching of a nuclear missile centre at Baliapal. The agitation was so effective that the government withdrew its decision.  Com. Bhavani participated in this agitation very actively.

Comrade Purushotham Pali breathed his last with heart attack in 1988. After that on the question of local and non-local feelings created by some of the state committee members, Comrade GP differed with them.

There was serious attempt to build Girijan movement in the Parvathipuram area under the leadership of Raithu Coolie Sangham since 1992. Anti arrack agitation also is a part and parcel of this movement. The effect of anti arrack agitation extended to the villages in Orissa adjacent to Parvathipuram. Thousands of adivasi people participated in this movement. In the midst of repression and disturbances we started Chashi Mulia Adivasi Sangh.

Comrade GP opened the office building of Raithu Coolie Sangh constructed under its leadership at Parvathipuram on 7th May 2003. During the election time he participated in several public meetings and spoke on different contemporary problems. As an extension to this he attended in the activities of Chashi Mulia Adivasi Sangh. We constructed a Martyrs Column at Srikakulam.   Which was suppose to be inaugurated by Com. Kanu Sanyal. District police prohibited this meeting which will be held on May 27th of 1998. Comrade GP after words opened it in September 1999. All these things show the affinity and political connection between us and Comrade GP.

In 2008 we had differences with Comrade GP on the political line to be taken in regard to the land problem of Narayanapatna, as a part and parcel of the movement that was going on in Bandugaon and Narayanapatna areas of Koraput district. There were contradictions between Adivasis and Paidies of Narayanapatna. As a class Paidies were poor. But Paidies (SC) on behalf of Sondis and the Shavukars used to attack the Adivasis, threaten them and extract paddy from them. In order to disintegrate the Chashi Mulia Adivasi Sangh, sondies and the Shavukars conspired together to make use of the differences between Paidies and Adivasis to their advantage. In spite of the atrocities of Paidies on Adivasis, we wanted to unite them and Comrade GP differed with this line. While condemning the attacks on Adivasis by Paidies, the Chashi Mulia Adivasi Sangh at the same time decided to unite them in the struggle for land. But Comrade GP was against this. The Orissa state committee members Com. Srikanth, Com. Basu and some other state committee members are also not accepted GP’s line. This is the main difference between Comrade GP and us. Instead of agitation on the basis of Narayanapatna land issue this difference led to many other problems and as a result of it we lost physically valuable comrades. The police killed Comrade Singanna in this agitation. We lost Pinninti Suresh. After that Maoist party murdered Comrade Arjun. Several comrades were imprisoned under so many false cases. Comrade GP was also imprisoned, Chashi Mulia Adivasi Sangh widely agitated against his arrest.

Lastly I remember how Comrade GP got a brain stroke in a meeting at Nellore in 2002. He was out of danger as immediate treatment was given. The doctors and comrades saved his life.

His sister greatly co-operated Comrade GP. She extended a helping hand to his family. Comrade Safaali belongs to Rajghat village in Baleswar district. I had affectionate relations with that family also. We cannot separate Comrade Safaali from the political life of Comrade GP. She had taken up several responsibilities of the party and at the same time maintained the family with hardship. Once again I extend my red salute to Comrade GP.

DEEPEN THE UNDERSTANDING OF MARXISM IN THE COURSE OF STUDY, APPLICATION AND PRACTICE

It is 172 years since the MANIFESTO OF THE COMMUNIST PARTY authored by Karl Marx and Frederick Engels was first printed and released on Feb ...